You've probably seen many recipes that call for Cotija cheese. The way this cheese tastes in your mouth all salty and crumbly as you chow down on some elote and tacos will make you feel as if you’re having real Mexican food. It may just be a little ingredient or a garnish for some but the way this cheese can do to the palate, whether it be soft or aged, is enough to ignite your taste buds.

But alas, Cotija cheese may not be available where you are, which is unfair if you think about it. Mexican cheese like Cotija should be offered in every grocery store. So in the end, you have no choice but to look for a Cotija cheese substitute.

Yes, you read that right. Despite not having Cotija around in your local supermarkets, you can still replace this with other kinds of cheese that’s similar in taste and texture with Cotija. Not entirely, though. Because let’s face it, Cotija has its distinct charm, the way other cheeses have too. But knowing there’s some Cotija cheese substitute near you is such a relief.

These five replacements for Cotija cheese will make cooking Mexican food so easy with how conveniently common they are.

What is a good substitute for Cotija cheese? Well, there is a lot to mention. This cheese comes as a fresh soft cheese or a dry-aged one, also known as Cotija Anejo. Below are 5 replacements for Cotija whether you want to use a soft cheese or an aged one. The closest cheese to resemble Cotija in it its dry-aged form is Parmesan. Texture-wise, it’s almost the same since it can be a little hard but also crumbly. This is suitable for topping it off on fresh salads and hearty tortilla soups and chowders. You can also grate it over corn if you’re making elote.

As for the taste, Cotija is salty just like Parmesan which makes it the ideal choice of cheese to use whenever you need aged Cotija but can’t find one. Parmesan is common in most grocery stores that you’ll be able to find it easily. The scent may not be as strong as Cotija though, so do keep that in mind.

Another tidbit you might be interested to know is that Cotija is very well known as the “Parmesan of Mexico”. With that being said, you know you’re on the right track when you use Parmesan even if the recipe calls for Cotija. Another similar cheese to Cotija is feta. The texture of a fresh Cotija is like that of feta: soft but not too soft that it’s close to being mushy. It’s also dense too that makes it easy for you to crumble on salads or stuff into vegetables such as bell peppers.

The taste of feta resembles Cotija as well with it being salty. So if you’re wondering what is Cotija cheese similar to in its fresh state, it’s feta. You didn’t know you can use this one, did you? In the event you need Cotija and can’t find Parmesan cheese, Romano is the next best-aged cheese you can substitute. Romano has a strong pungent scent and also quite salty. It’s best used in tacos or enchiladas.

Another cheese that can be a replacement for Cotija is Ricotta Salata. It’s more different than just the usual Ricotta, which is a creamier and softer type of cheese whereas Ricotta Salata is harder and can be grated. Be sure to read the label before buying this type of cheese. You don’t want to end up with the wrong kind of Ricotta.

One thing to note about Ricotta Salata is it’s not as salty as Cotija. So if you’d like to use this kind of cheese, try adding salt to reach the same flavor that Cotija brings. Think of it as a milder Cotija if you do. 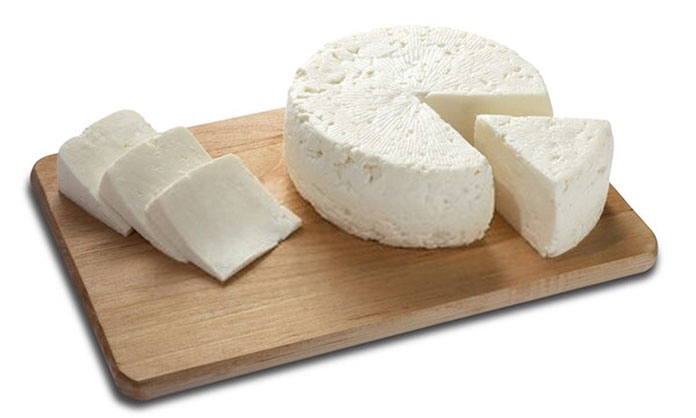 A common Mexican cheese other than Cotija is Queso Fresco. This belongs to the soft and crumbly side of Cotija and also a bit milder – milder than feta cheese even. But it’s still a great choice for rice dishes, refried beans, quesadillas, or if you just want another Cotija option that’s not too salty.

So Cotija cheese vs queso fresco? It depends on your taste buds whether you want a rich salty cheese or a less stronger one. Either way, you’re getting such tasty cheese.

What Is Cotija Cheese?

You have an idea of what Cotija cheese is through its more common counterparts mentioned above. But let’s dig a little deeper to better understand what this cheese is and what is it made of.

Cotija is cheese made from cow’s milk. It’s also named after the Cotija town in Michoacán, Mexico. As per tradition, Cotija cheese is aged for three months to a year. The color and texture of it are dense and white therefore resembling feta. As it ages, it turns drier and harder, making it a closer sibling to Parmesan.

You should also take note of the fact that Cotija cheese does not melt. This makes it a great garnish for a lot of Mexican dishes or to mix in most Mexican cuisine since it helps bring out the food’s aroma and flavors.

Where To Find Cotija Cheese?

Of course, it couldn’t be helped that you’d want to try out the real deal before looking for a substitute.

If you prefer shopping online, Cotija cheese can be found on Amazon. It can also be found in several big grocery stores in the United States such as Walmart or Trader Joe’s. But be warned that even though they offer Cotija on their shelves, it doesn’t mean that it’s available all the time. Some stores are sold out of Cotija that it can be difficult to find one. It only goes to show that this cheese is popular and a choice for many Mexican dishes.

But that’s why we’ve shown you the many substitutes you can swap Cotija with in case you won’t find them in stock. They’re easier to find and tastes just the same.

Now that you know what Cotija cheese is, it’s time for you to try out several Mexican dishes in your own home that’s quick and easy.

5 Cotija Cheese Dishes To Try With

Here are a few dishes you can make that include Cotija cheese. You may also use the Cotija cheese substitute mentioned above if you can’t find one near you: Elote is a popular Mexican street food. It’s corn on the cob that’s grilled with butter, brushed with mayonnaise, sprinkled with chile powder salt and Cotija then served with a squeeze of lime. Ricotta Salata can be used as a substitute for Cotija in elote.

Some vendors sell elote with kernels rather than on the cob. You’ll find dozens of street vendors in Mexico selling these. But what’s a little mess when you sink your teeth in this heavenly treat? Traditionally, enchiladas are just corn tortillas dipped in a sauce known as mole. However, through time we have begun to eat enchiladas with filling in them.

You can use Cotija cheese or substitute it with Parmesan or Romano. Chicken or beef may also be used in enchiladas. It’s an ideal dish that’s best shared with the whole family. If you’re making a Mexican salad, the Cotija cheese substitute to go with here is feta. Corn salad is a popular example. It’s like having a lighter elote and with more lime juice and other vegetables such as bell peppers, jalapeño, and onions. Mexican salads are refreshing and can be a healthy option for your diet.

Not in the mood for Mexican? No problem. Light zesty salads go well with Cotija or feta cheese too. Mexican soups are a quick meal by itself. It’s filled with vegetables and corn and can be turned into chowder. If Cotija cheese isn’t available to use, you may substitute Parmesan to garnish.

You can also make tortilla soup with chicken and red peppers topped with Parmesan. This soup gives you that nice spicy kick but also filled with flavor when you eat a bowl of it. Refried beans with tomatoes and avocados on some tostada are an amazing match. Do you know what would make it better? It’s having Cotija cheese on top. You can also use queso fresco as a substitute.

Cotija cheese may be an ideal type of cheese for most Mexican food. But don’t just use it for that kind of cuisine. You can also use Cotija and its many substitutes for other food such as vegetable salads, dips, and casseroles.

Whether it be the fresh soft cheese or the aged one, Cotija is one you should try in your next dish. You may also explore other Mexican cheese such as Panela and Manchego. The world of Mexican cheese is endless and one that’s waiting for you to explore.

What was your favorite take on all these Cotija cheese substitutes? Are you ready to try them all out? Drop us a comment if you’ve tried substituting these cheese in your Mexican meal.