Hangovers. You probably have experienced them a couple of times already.

I know a person is not lying when they say that they don't want to be nabbed in a whirlpool of headaches and vomiting. But then again, humans are drinking animals. Perhaps the only way to counter the harrowing aftermath of a drinking spree is to get the best Bloody Mary mix.

Bloody Mary is originally concocted as a cocktail. It usually contains tomato juice, vodka, and various spices and flavorings. People usually drink it during the morning or afternoon, but its most popular use is to treat a wicked hangover.

Now, I know that you have different intentions as to why you want a suitable variant of Blood Mary. And of course, I won't judge you for that. In fact, I am going to show you some of the finest commercial variants of this drink. Check them out now! 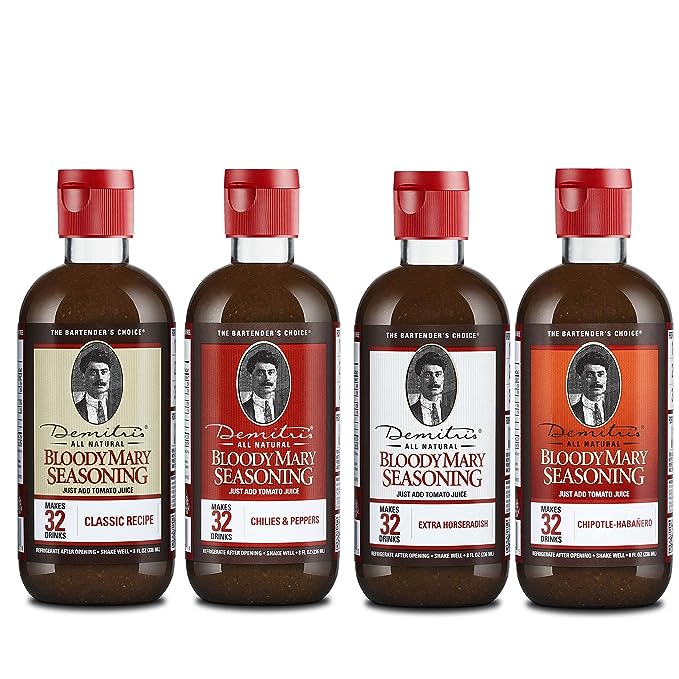 This one comes in different varieties. Despite that, it features an all-natural composition. No chemicals and other artificial contents were included in its formulation. You can say that each bottle of Demitri's is an embodiment of the traditional Bloody Mary.

Specifically, the four flavors that it can offer you are the following: Classic Recipe, Chillies and Peppers, Extra Horseradish, and Chipotle-Habañero. Any of these will make you relish the titular effects of Bloody Mary. To ensure the best tasting experience, you should mix them with vodka and tomato juice.

Surely enough, you can also use these mixes in other cooking recipes. Whisk it to your salad or include it in your grill, these concoctions will certainly spice up your delicacies. You'll never be disappointed with its texture and quality, too.

So for those who want the best from the start, check the Demitri's Bloody Mary Mixes now!

Charleston Mix is also a great option for commercial Bloody Mary. It offers smoothly blended all-natural ingredients. It has a favorable and delectable taste, which easily reminds you why you like Bloody Mary in the first place.

The ingredients used in this mix are freshly harvested from South Carolina farms. They are guaranteed to be fresh and free from any chemicals and contaminants. Specifically, the Charleston Mix includes apple cider vinegar, habanero mash, Worcestershire sauce, and a myriad of spices. This unique combination improved its appeal and heat.

Aside from these flavorful ingredients, this particular Bloody Mary is friendly vegetarians and vegans alike. It doesn't have beef broth, which is found on its Bold & Spicy variant. Instead, it is replaced by organic carrot juice. Furthermore, it is gluten-free and doesn't use high fructose corn syrup or MSG. As a result, it became succulent and healthy at the same time!

If you have noticed, this Charleston Mix Bloody Mary does not use horseradish, which is quite common on other Bloody Mary mixes. However, the balance of spiciness and flavor is still present in its every bottle! 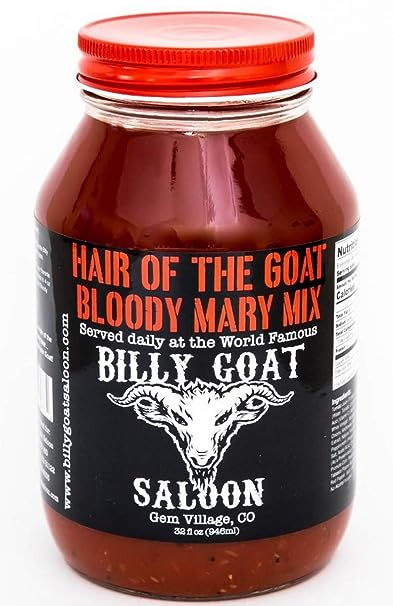 The flavor of this mix is bold and zesty. It is an excellent choice for curing your hangover because of the extra punch that it has. I can say that it is far from being the same as the conventional Bloody Mary mixes out there.

Moreover, the process of manufacturing this Bloody Mary mix is handled by expert bartenders. In fact, its formulation has been perfected by one of the finest dive bars in the United States. It is definitely something that can appeal to your senses because of striking spiciness and flavor.

But of course, there are other uses for this Bloody Mary mix aside from being a partner for vodka, tequila, or gin. You can use it as a marinade for chicken, pork, and beef. There's a certainty that once this liquid mixture is applied to these ingredients, they'll become more flavorful and impactful to the tongue!

The Hair of the Goat Bloody Mary Mix is a worthy addition to your kitchen. Make sure you can get this! 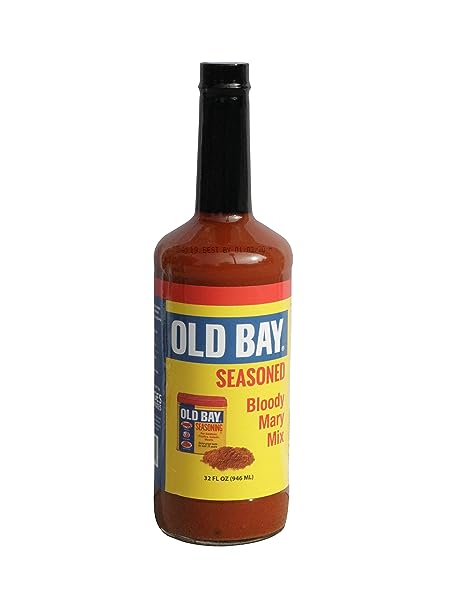 George's Mixes is among the notable manufacturers of various Bloody Mary mixes. In Berlin, its Bloody Mary concoctions are being used in restaurants, bars, and individual kitchens. That's how good its creations are.

Specifically, the Old Bay Seasoned Bloody Mary Mix is a one of a kind opus of George's Mixes. After all, this one is an exact derivative of traditional Bloody Mary recipes; hence, the name Old Bay. This one was produced through the collaboration of McCormick, which owns the original recipe for this particular Bloody Mary mix. McCormick reached out to George's Mixes to start this wonderful partnership.

Aside from the all-natural ingredients, the Old Bay features the iconic Maryland seasoning. The latter is a mixture of crabs and spices, which produce a unique flavor to the entire liquid. As powerful as it sounds, this Bloody Mary mix is actually mild. You'll enjoy the Old Bay because of its delicious flavors rather than its heat.

Using it as a marinade and flavoring to your recipes is undoubtedly a good idea. It provides balance in the overall palette of the delicacy while ensuring that it won't ruin its original flavor.

There's so much about George's Old Bay Seasoned Bloody Mary Mix. I highly suggest that you check it out.

I also adore the Stonewall Kitchen Bloody Mary Collection. It gives off a nostalgic homemade taste, which soothes both your taste buds and soul. It is an excellent addition for enlivening recipes. Since it is not that spicy, it is suitable for children and people who are sensitive to the spicy taste.

Right from the get-go, this particular Bloody Mary comes in three versions: Cucumber Dill Bloody Mary, Peppadew Sriracha Bloody Mary, and the Traditional Bloody Mary mix. The best thing about it is that you can get all these three in a single package. It simply improves your versatility in cooking. Each of them is notably flavorful, too.

Sure enough, the composition of these Bloody Mary mixes from the Stonewall Kitchen are all-natural. You can't find any chemicals or artificial additives that were used in their manufacturing. They only use organic ingredients that were freshly harvested from farms. Horseradish and tomato are among the prominent ingredients of these mixes.

You'll never regret the quality of this Bloody Mary collection from Stonewall Kitchen. They are zesty, bold, and complements different homemade recipes.

One should know that not all Bloody Mary mixes out there are the same. It is easily proven by the list that I made here. Some mixes have consistent texture while others a thick. Meanwhile, other variants are notably spicier than their counterparts.

It would really be best if you know what kind of Bloody Mary you are dealing with. Here are some of them:

A: There has been a hazy confusion as to the origin of Bloody Mary mix. Apparently, it was in 1920 when Ferdinand Petiot, the bartender of the Harry's New York Bar in Paris, experimented various cocktails and mixed it with vodka. It was at that time where Russian immigrants have a high influx in the area due to the revolution. Furthermore, it was that time as well where the tomato juice cocktail is a popular thing in France. This is how the Bloody Mary mix has been born.

Many believe that Bloody Mary was named after Queen Mary Tudor. The reddish coloration of this drink is indeed a perfect representation of the bloody reign of the said queen in England during the 16th century. However, there are some who suggest that George Jessel named the drink after Mary Geraghty, his close friend.

Q: Is Bloody Mary mix good for you?

A: Surprisingly, Bloody Mary is actually good for your health, especially if you are going to drink it in moderation. It has low-calorie content and includes a lot of nutrients. The tomatoes used in this mix are rich in antioxidants, lycopene, catechins, and vitamin A. They can help your body become strong and resistant to various diseases.

Q: What is the best Bloody Mary mix?

A: This question will always yield a subjective answer. That's the very reason why I included as many Bloody Mary mixes here so that you can see which is suitable for you. Some of these brands are already familiar to you, so you might start your hunt based on that specific preference.

A: There's no guarantee that all the Bloody Mary mixes that are sold commercially today are free from gluten. The best thing that you can do here is to check the labels of their containers. If a particular mix doesn't declare that it is gluten-free, then there's a high chance that contains certain amounts of the said substance.

Q: What to add to Bloody Mary mix?

A: One of the greatest aspects of Bloody Mary is its versatility. Basically, you can add a lot of stuff on it. You can include celery stalks, cherry tomatoes, and olives to provide it with its finishing touches. If you want to enhance its foundation, you can try adding lemon, Worcestershire sauce, pepper sauce, and ice.

The best Bloody Mary mix is actually more than just a cure for hangovers. It is a cocktail that can spice up an event or ensure that your dishes will reach their peak flavor. It would always be advantageous on your part if you get a bottle of this mix ready in your kitchen or minibar.

That's it for now. If you have a question, feel free to drop them in the comment section below.