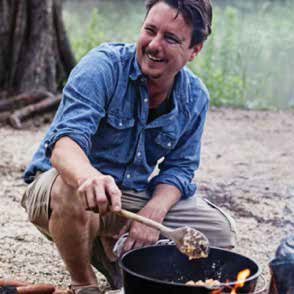 His journey began at the age of 14 with his first job bussing tables and as all-purpose kitchen aid. By 17, Tim had enrolled in Johnson & Wales University Culinary Program mastering the rigorous building blocks of classic techniques. Other influences include Pan-Asian from Jonathan Eismann’s Pacific Time and THOM restaurants, Bond Street under acclaimed sushi Chef Hiroshi Nakahara, and the founding father of Modern Texas Cuisine, Stephen Pyles.

Working with Stephen is where Tim became intrigued by the primal roots and regional style cooking of the Old West and when he was first called by the fire. It was time to make a move and dial things back; to remember what he loved about cooking and food. The culinary world will never know how close it was to losing him during this time in his journey.

Once he made the commitment to open SMOKE in Dallas, he went directly to the source by traveling three months through the Deep South and talking to people about cooking authentically over wood. Tim found American cookery at its roots: homemade, honest-to-goodness, whole foods and crafted dishes.

Upon his return to Dallas, he was determined to make the kind of food that conjures up memories of American heritage, food with soul, nostalgic integrity, the spirit of hospitality, celebrating community and most important of all, creating that final flavor that lingers, which he refers to as "taste memory."

His food and philosophy continues to evolve naturally, honoring old-fashioned recipes and putting together an intelligent mix of flavors, sophisticated yet balanced with the familiar. "Bloom where you are planted" is his approach to cooking with what is available both locally and regionally. He has found his food voice – honest, genuine and real.